Christianity Astray Today (CT) had put up a series of podcasts on The Rise and Fall of Mars Hills quite some time back. On the surface, the series does highlight problems with the defunct Mars Hill Church and especially its founder Mark Driscoll. The toxic "hyper-masculinity" and pornification of religion promoted by Driscoll is indeed contrary to true Christianity. The podcasts promote egalitarian views, but that should be expected of the broad evangelicalism that is CT, so the podcasts should be fine, or are they?

The problems with the podcasts come about when you consider the timing and context of the podcasts. First, consider that Evangelicalism had no problems with Driscoll back in 2009 when Driscoll was all the rage. When John MacArthur, a complementarian pastor by the way, criticized Driscoll for his degradation of the Songs of Songs, he was criticized by Evangelicals. Evangelicals had no problems with Driscoll back then, and the reason why CT can run this series of podcasts now is because Driscoll has been disgraced and out of mainstream Evangelicalism for a long time. "After all, who are you to judge Pastor Mark Driscoll?" Where was CT when MacArthur criticized Driscoll for his disgusting treatment of the Songs of Songs? Nowhere! CT only attacks people when they are out of power and influence in Evangelical circles, kicking them when they are down. This is not a defence of Driscoll, but rather a statement that shows how Evangelicalism (Big Eva) deals with people they disagree with. CT applies "judge not" to those in power and influence even if they disagree with them, but go after them when they are out of power and influence.

Second, consider that in episode 5 entitled "The Things We Do to Women," feminists are brought in to critique Driscoll, while those who had criticized him before like MacArthur were overlooked. Here, we see CT has an agenda in mind when it comes to the timing of these podcasts. American society had its #MeToo movement and the airing of former President Donald Trump's past misogynistic remarks. It is clear that CT is using this to push egalitarianism, noting that it has the Americo-centric social "historian" Kristin Du Mez in the podcast commenting on the evolution of the emphasis on men and male headship in the American church. I say "historian" because Du Mez does not actually do history. She starts with a conclusion and reads her thesis into history, since it is clear from Reformation writings and even patristic sources that patriarchy (understood in its neutral sense) of some form is the historic Christian view of gender relations. CT is capitalizing on the current social moment (celebration of victimhood and the dismantling of "hegemony" and oppressive systems of power) and bashing Driscoll (who does deserves to be bashed, but that's not the point of contention) in order to stealthily promote egalitarianism. Instead of dealing with Driscoll's error, complementarianism is tarred by association with Driscoll, such that anyone defending complementarianism is seen as a misogynist who promotes porn and "rape culture" by default. The worst thing is that CT is right in its exposé on Driscoll, but its narrative poisons the well against complementarianism, and all this by appeal to emotions without any appeal to the mind.

To go deeper into the tactics of Big Eva, we see here the way Big Eva deals with those they disagree and/or dislike. Many Evangelicals today prefer to be non-confrontational. Calling people heretics is considered socially unacceptable. Talking frankly about disagreements, disagreeing and fighting openly — these are rejected by Evangelicals. But it is not as if Evangelicals are all about love and fun and roses. The human heart does not change, and disagreements still happen. But instead of the open confrontations of the past, today's Evangelicals engage in passive aggression and other forms of scheming and politicking as a way of dealing with their problems and disagreements. Instead of openly and honestly confronting Driscoll in 2009, CT waited until 2021 to bash Driscoll, when it is more or less socially acceptable to do so. Instead of openly discussing the debate between complementarianism versus egalitarianism, they underhandedly used their podcast to create a visceral antagonism against complementarianism, all under the banner of caring for women. Does anyone seriously think that the passive aggressive posturing, the scheming, the conniving, is way better than open confrontation and disagreement?

The issue of "white privilege" and self-condfidence

The issue of "white privilege" is treated as the original sin of the radical liberal Left. Insofar as it is ideological, it reads the concept into every interaction between individuals of different ethnicities, particular when one or more of the participants are considered "white." Nevertheless, there is some empirical evidence that would seem to support the concept. But just as in dealing with metanarratives, the argument commits the fallacy of affirming the consequent, in the sense that empirical data that would seem to support Critical Race Theory (CRT) could be legitimately interpreted in another manner to support a different narrative.

What are the empirical evidences that would seem to support "white privilege"? Consider how people of the Caucasian ethnicities are treated differently in places like Singapore. Behavior that are not tolerated if committed by locals are tolerated when whites do it. White theologians like Carl Trueman can criticize other theologians like Bruce Ware and are still treated as godly men, but we know what happens if a Singaporean does the same. White pastors like David Platt promote division in their own church, and yet their books continue to be promoted. Does anyone sincerely think that a Singaporean pastor can get away with what Platt is doing in his own church and also have their books promoted?

These, and many more examples of social interactions that others can provide, seem to show that "white privilege" is alive and well. But I would suggest that the evidences point elsewhere. Specifically, it points to a veneration of whites (a concept most aptly conveyed by the Chinese term 崇洋) by Asians in general coupled with a lack of self-confidence in oneself in comparison to whites. In other words, it is because we do not practice color-blindness but instead make ourselve inferior that "white privilege" comes about. If we have self-confidence, then there is one standard for both whites and non-whites (i.e. color-blindness). If we do not accept such behavior, then it should not matter who commits that behavior. If it is wrong to criticize other Christians, then please go ahead and condemn Carl Trueman et al as schismatics. If you claim that it is wrong for a godly Christian to criticize other Christians, yet exempt these theologians from your judgment, you are a hypocrite!

What is the solution to "white privilege"? Stop treating whites differently from non-whites. Do not treat them as superiors, and do not treat them as inferiors. Treat people with no regard to their skin color and ethnicity, and you would solve the problem immediately. The question is: Will you do it?

Book Review: Sapiens: A Brief History of Humankind (Part 5): Induction and the History of Religions 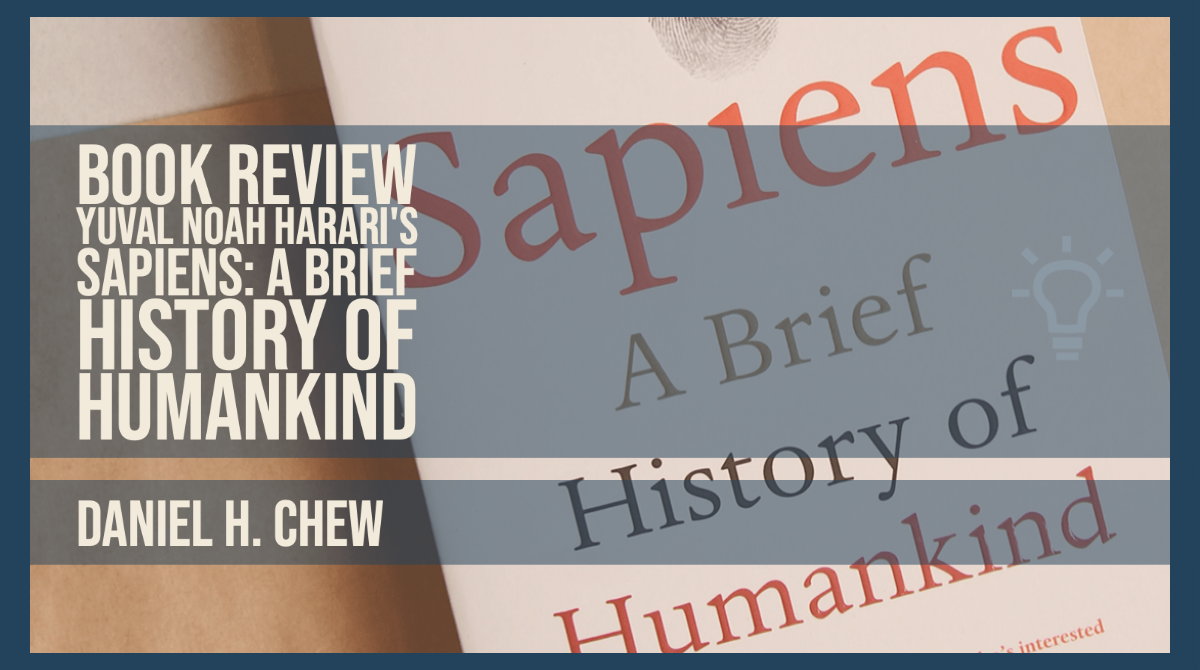 Part 5 of my book review of Yuval Noah Harari's book Sapiens: A Brief History of Humankind is up at the Daily Genevan site, here. In this central part of my review, I point out the main problem with Harari's telling of history, which is the problem of induction. While the problem of induction is minimized in normal historical reconstruction since we can get an appoximation to the truth, looking especially into pre-history erases guide posts that alllow us to make such an approximation, as I argue in the review here.

After demonstrating Harari's problem with induction, I shift to the issue of religions, noting how Harari's view on religion is disrespectful towards all religions, and pays zero heed to what those religions actually say. You can read more about it in the review.

The Sovereignty of God and our emotions

In light of my opposition to Vincent Cheung, I received a feedback concerning this post. Specifically, this sentence was singled out: "We live in a fallen world, not in the realm of God's decrees and sovereign will." How can that sentence make sense if one believes that God is sovereign over the world?

Seen out of context, such a sentence does in fact undermine God's sovereignty. But this sentence has to be read in context. When I use the words "world" and "realm" here, I am not using this to be referring to the world in its cosmological sense. Rather, as it should be seen in context, the focus is on the world as conceptually perceived, the way "world" is used in Thomas Kuhn's analysis in his epistemic anti-realism. We do not live in the conceptual world of the decrees of God, in the sense that all these are hidden from us and are not on us apart from mediation. Since God does work through secondary causes, He is not directly acting on us. In Cheung's theodicy, since God is diretly acting on us, the only response is resignation. Whereas where there are real secondary causes, we can rage aginst the secondary causes while trusting in God the primary cause.

In life therefore, our faith in the sovereign God is meant to instill trust and confidence in our Lord. It is not meant for us to decipher into the mysteries of the sovereign will, to become fatalistic, or to become stoic in our emotions. Cheung's theodicy however fails to do either of these, and thus necessarily leads to fatalism and stoicism.