To see humanity across racial lines one must see frankly how people of other races live as human beings, not as members of a race. [Shelby Steele, White Guilt: How Blacks and Whites together Destroyed the promise of the civil rights era (New York, NY: Harper Collins, 2006), 129]

Tim Keller has written an article that supposedly critiques secular views of justice and states that his view of justice is "none of those." This article seems to prove that Tim Keller is unaffected by critical theory and secular view of justice, and thus his "biblical justice" is indeed biblical. But is it?

Examining Keller's view of justice can be indeed helpful, and articles like this have done so. What irks me however is Keller's incessant desire to put forwards his view as transcending all other views ("mine is none of the above"). Whether it is saying that the Gospel is neither "religion" nor "irreligion," Keller's rhetoric is in my opinion unhelpful. The fact of the matter is that many Christians have thought about issues of the Gospel, or issues of justice (in this case) for centuries. Are those people trying to be unbiblical? Are they not proposing their views as what they believe (truly or falsely) to be biblical? Keller seems to think that he is the first one who is thinking about issues of justice with a desire to be only following Scripture and nothing else, as if no one before him has done so before.

In this light, I have prepared this chart. Keller's "spectrum of justice" is only a line, which strikes me as being simplistic. Thus, I have decided a coordinate system of two ideas about justice would do more justice (pun intended) to the spectrum of justice theories. When mapped this way, Keller's view can be placed onto the spectrum, instead of being "none of those." 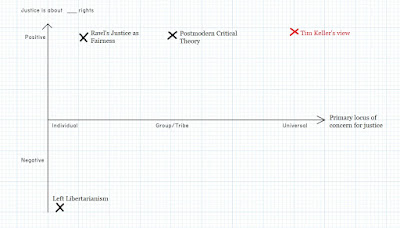 Now that Keller's view of justice is mapped, it can be examined. It is not "none of those" - a term of false advertising that give the false impression that Keller is indeed above the fray.

In 2016, a big online controversy erupted when a bunch of Reformed notables decided to attack a doctrine held by some evangelicals to be heresy. The ensuing firestorm produced lots of heat and very little light. Fast forward to 2019 and a book was written aginst this doctrine (ESS - Eternal submission of the Son). As someone who holds to ESS, this piqued my interest. I have thus read the book, entitled Trinity without Hierarchy: Reclaiminig Nicene Orthodoxy in Evangelical Theology, and did a book review on it, here. An excerpt:

I will review this book along the lines of an enquiry, instead of a normal thematic book review. The first question is: What is ESS, and did the contributors rightly understand ESS? The subsequent question then is: What do I think of their evaluation of ESS? Note that for the subsequent question I will only address those that I consider to have some understanding of ESS, or who deal with the supposed implications of ESS

Since I hold to ESS, it is almost guaranteed that I reject the allegations of this book. But do read further for my reasoning which states clearly why I reject this supposed "retreival of orthodoxy" project.

COVID-19 and the Necessity of the Church

In light of the issue facing churches around the world concerning the pandemic and the suspension or opening up of churches for worship, here is my small contribution in an attempt to bring light to the issue at hand, in my article COVID-19 and the Necessity of the Church. An excerpt:

In late 2019, what was initially thought to be a small viral outbreak began in the vicinity of Wuhan, China. By February 2020 however, this outbreak had metastasized into an epidemic in Wuhan and soon spread across the world. Initially called the Wuhan virus, what is now known as COVID-19 (the SARS-CoV2 virus) has caused a pandemic creating chaos and death across the world, stretching the capabilities of healthcare systems to the breaking point. South Korea, Northern Italy, and New York City in the United States became the next epicenters of this virulent disease. 6 months later, this plague continues to spread without a clear indication of subsiding. Governments around the world have implemented drastic and even draconian measures in an effort to manage or halt the spread of the disease, measures that have yielded varying degrees of success.

Buy truth, and do not sell it; buy wisdom, instruction, and understanding. (Prov. 23:23)

Recently, Pastor John MacArthur posted an article entitled "Christ, not Caesar, is Head of the Church." The article caused a firestorm from accusations that MacArthur is endangering people, that he is trivializing the pandemic, and that he is violating Christian liberty by forcing people to stake a stand on whether to disregard all safety measure and not wear masks or practice social distancing. With all the accusations, one really wonders whether anyone has actually READ the article instead of reading what they think is present in the article.

What does the GCC (Grace Community Church) article actually say?

The article by John MacArthur and the elders of Grace Community Church asserts the following major propositions:

The minor propositions (in the addendum) state thus:

What the article does NOT say

Before we address a few misunderstandings, we can see from Phil Johnson's (an elder at GCC) tweets what the article does not say. First, it does not say that ALL Christians and all churches must reopen church in the exact same way as GCC.

Some are claiming that GCC was calling upon all churches to gather and insinuating that those who don’t are sinning. Multiple leaders at GCC have made it clear that this isn’t the case. But I asked @MikeRiccardi_ to clarify this once again. I found his response to be spot on: pic.twitter.com/S5AJ4Ctar6

Second, it does not say anything about masks or social distancing. These words are not found in the entire article. Third, it does not say that one must agree with GCC's assessment of the pandemic. That is why it was in the Addendum and not the main article. That it was in the Addendun under the beginning words "The elders of Grace Church considered..." indicate that this was the elders' particular application of the principle of Christ being the head of the church to the situation of GCC.

The article and its critics

From these, it can be see that many of the critiques of GCC have little to do with the article. Jonathan Leeman of 9Marks in his response totally misunderstood the purpose of the article's clause asking people to sign on the statement, a fact he later learned.

Micah, if you're telling me they are NOT saying this isn't the only way of faithfulness, WONDERFUL! I'd encourage them to clarify and offer less conscience-binding language, because many people have shared my misunderstanding. Blessings.

Sadly, misrepresentations continue. Taking offence at one of MacArthur's remarks, Gary Ortlund asserts that MacArthur is saying that churches that do not reopen like GCC are not really churches and thus in sin. But that is NOT what MacArthur has said. Mark Lauterbach repeated Leeman's misunderstanding and also Ortlund's misunderstanding. On top of that, Lauterbach has apparently read into the article that GCC is equating their situation to full-scaled persecution. But that is NOT what the article has said. It merely asserts that government intrusion into the worship of God is a form of persecution, NOT that it is persecution like that suffered by the persecuted church around the world! Lastly, Lauterbach fails to recognize the major statements from GCC's particular application of her beliefs to her situation, which is sittuational, as Mike Riccardi has publicly stated!

The problem in American Christianity today, as seen in the blatant misrepresentations by Leeman (initially), Ortlund, and Lauterbach, is a disregard for the truth. What MacArthur and GCC has actually stated does not matter. What matters alone is what they THINK MacArthur and GCC are saying. Except for Leeman, Ortlund and Lauterbach have not retracted their blog posts and corrected their errors, although I can surely hope they do so. The problem of truth is not limited to the Liberals but also the Conservatives, both "Big Eva" and "Big Reformed." Besides the Covid-19 virus, the aversion to truth is truly endemic throughout American Christianity. How else can we explain why misrepresentations are seldom retracted, lies about people or ideas or things refuse to die, and there are absolutely no consequences or at the very least penitance from those who have engaged in violations of the 9th Commandment, both American Evangelical and Reformed pastors and theologians alike? The Genevan Commons fiasco is one such example where the 9th Commandment is routinely violated by Reformed pastors, for example. The churches in America have become just like the world, believing her own lies when it suits her!

Apart from God, there is no hope for the churches of America. She has imbibed the culture's aversion to truth, and refuses to repent of her craven idolatry, pastors and parishioners alike. Lord, have mercy!